Another Tracks through Grantham project get-together will take place in Grantham on Wednesday 18th October 2017.

We are working on the programme and if you've been on our contacts list for previous meetings we'll send you more information once it's ready.  The same applies if you've been in touch with us more recently and left us some contact details.  In either case you should have received an email from Mel earlier today.

If neither of the above apply and you'd be interested in hearing more please let us know via the 'Contact Form' on our Contact Us or Subscribe page, and we'll get back to you.  (To prevent spam we don't publish a direct email address on the website.)

Our latest new page has been inspired by some photographs and the story of a trip made in 1959 by Loco men from Grantham and Retford to the Romney Hythe & Dymchurch Railway in Kent, but it also sounded echoes of a friendship forged in the 1920s, and there's a resonance with a recent reunion at the Bluebell Railway...

What was A3 No. 60066 Merry Hampton doing in Edinburgh in August 1963, nearly 300 miles from its home at Grantham Loco?  Hylton Holt relates how the engine was discovered at St Margaret's shed one morning.

With all that's been written and published down the years about the Grantham Railway Disaster of 19th September 1906 one could be forgiven for thinking that there are no stones unturned so far as interesting angles on that fateful night are concerned.  We did too until recently, when our attention was drawn to reminders still to be found of two of the passengers who died in the wreckage.

Discover how a searchlight in a lookout station at the mouth of the River Tyne and an angel in a Cambridgeshire church yard are connected with victims of the disaster in our latest new pages here.

We've said before that often we can't predict where the next idea for a new page on Tracks Through Grantham will appear.

When we showed a page from the Railways Rediscovered section of the Tracks Through Grantham website at our last meeting in Grantham, it led to a short discussion about rail tours which visited the various former ironstone branches, and about which lines had been travelled over on which tours.

In the few weeks since then we've been on the trail of information and photographs, which are assembled in our latest page Rail Tour Rambles round Grantham.

At our meeting in Grantham on 12th April we asked the audience to help with information about four photographs.  It was a resounding success, providing either an answer directly or clues which have set us along the path to the answer.

First up was a colour photograph sent to us by Mick Grummitt showing gleaming A3 locomotive No. 60047 Donovan on the engine spur near the North Box.  The face of a member of the crew could be seen in the cab, but who was it?  See the picture here (scroll down to near the bottom of the page), along with the driver's name.

Yvonne Parker had sent in  a photograph of her mother, who became a ticket collector in 1944, on the platform in 1947 with three colleagues.  Yvonne said,  "Two of the people in it are known to me.  Ernie Huckerby on the left and my mother Irene Bradford (née Clarke) on the right.  I would really like to know who the other two people in the picture are too."  Station Inspector Joe Darmon was recognised from the photograph, which can be seen here (scroll to halfway through the page).

Next there was a query from Richard Whitaker: "Who are the three men with my grandfather, driver Sam Whitaker, in a photograph taken at a presentation marking 45 years’ railway service?"  Sam joined the Great Northern Railway in December 1918, so the picture dated from December 1963 or early in 1964.  Fellow driver Austin Brown was identified - seen here (again, about halfway down the page).

Finally, one of the series of photographs taken by Humphrey Platts of The Plant Centenarian excursion in 1953 showed the end of a passenger carriage in departmental use. 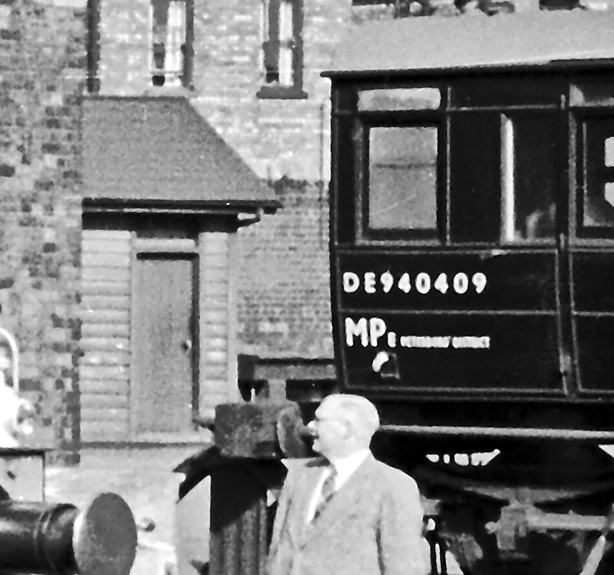 It was identified as of Great Northern Railway origin, and it was suggested that the GNR Society may help us with its identity.

Brilliant work!  We'll set aside some more puzzles for our next gathering in October, so please keep sending them in.

Readers of the May 2017 issue of The Railway Magazine will find an article on road vehicle bridge strikes and - yes, you're probably there before me - Grantham's railway bridges feature more than most.  The A52 Barrowby Road bridge has the dubious honour of being at No. 4 in the UK bridge 'hit parade' for 2015/16, and both it and the Harlaxton Road bridge are illustrated in photos by Nick Pigott.