Highdyke Junction to Bridge End, Colsterworth (via B6403)

modern photographs and description by John Pegg and C. Taylor

This series of photographs was taken by John in the summer of 2017 while walking the northern section of the former High Dyke branch line, a distance of 3 miles.

The branch was a mineral line which transported locally mined ironstone to  Highdyke sidings on the East Coast Main Line, just north of Stoke Tunnel.  From there it was taken to iron and steel works in Lincolnshire and the North Midlands.

There had been a junction at Highdyke since 1882 when a third running line from Grantham, the 'Up Goods', was extended as far as the approach to the two-track Stoke Tunnel.  The High Dyke Branch had originally been promoted in about 1912 as the Waltham and Highdyke Railway, because it was intended to connect Highdyke with Waltham-on-the-Wolds, the terminus of a Great Northern Railway branch line from Scalford, Leicestershire.

The branch was declared open by the Great Northern Railway Company on 3rd March 1919.  However, the connections from the main lines had been installed at Highdyke by November 1916, so the branch may well have been in partial use well before its official opening.

The High Dyke branch was built relatively cheaply across undulating countryside and it was quite steeply graded in parts, being known to generations of Grantham train crew as 'the alps'.   To avoid runaways on the sharp descent approaching the junction at Highdyke, regulations limited the number of loaded wagons that could be brought down the branch.  Longer trains were assembled in the sidings for onward transport over the main line.

The ironstone mines were mainly opencast and they had their own private railway systems.  There were loading points and exchange sidings at several locations on the branch.  No regular passenger services were ever operated, but there were at least two special excursions, on 19th June 1960 and 15th April 1972.  The branch closed in August 1973 after ironstone mining ceased.  There was an attempt at a preservation and leisure railway initiative - see here - but it failed, and by autumn 1975 all the track on the branch had been removed.

As a comparative latecomer to the local transport infrastructure the High Dyke Branch intersected many existing landscape features, both natural and man-made.  The Great North Road (A1) was spanned by two bridges, the earlier dating from the line's construction and the second, to the east, a result of the realignment and dualling of the A1 in 1959-61.  The River Witham was crossed and several roads, lanes and footpaths were intersected, requiring bridges or gates.  John has captured evidence of most of these crossings in the photographs.

The maps show the area in around 1974 (after the branch was closed but before the track was removed), unless otherwise noted.

Since about 1919 the locality where the branch joined the East Coast Main Line appears to have been referred to in official railway documents as 'Highdyke' (one word) or 'Highdyke Junction'.  Certainly in the mid-20th century the official name of the signal box, as printed on the box diagram, was HIGHDYKE, and this is also its name on the British Railways era Telephone Circuit Card illustrated further down this page.

However, Great Northern Railway paperwork of the 1880s uses 'High Dyke' and the joiner who, presumably following instructions, fixed the letters to the signal box nameboards in the same decade also left a space: HIGH DYKE.

The line itself is correctly referred to as the High Dyke Branch because High Dyke (two words) is the name of the B6403 road which, for its first 3 miles, the line closely paralleled.

To add to the variety of spellings available, the Ordnance Survey tends to have used 'Highdike' and 'High Dike' on its maps!

Humphrey Platts' visit to Highdyke on Thursday 5th September 1963, when the photographs above were taken, was arranged by his friend Walter Dale who was Yard Inspector at Highdyke.  Walter was an Alderman of the Borough of Grantham and he had been Grantham's Mayor in 1949-50.  This was the final week that Grantham-based locomotives worked the branch, because the shed closed the following Sunday.

John Pegg worked at Highdyke signal box and there are some of his recollections here (scroll about ⅓ down the page).

Let's take a final look at Highdyke with a wonderful panoramic view taken by Tom Boustead in February 1974.

The route is virtually impassable due to large trees, thorn bushes, brambles and nettles.  So for now we'll travel south - on foot or by bike or car - along the B6403 High Dyke (known to the Romans as Ermine Street) with the branch on our left.  We will turn off where we can to rediscover the railway.

Our first call is at Bridge number 1, which still carries a track to Highdyke Farm over the cutting. 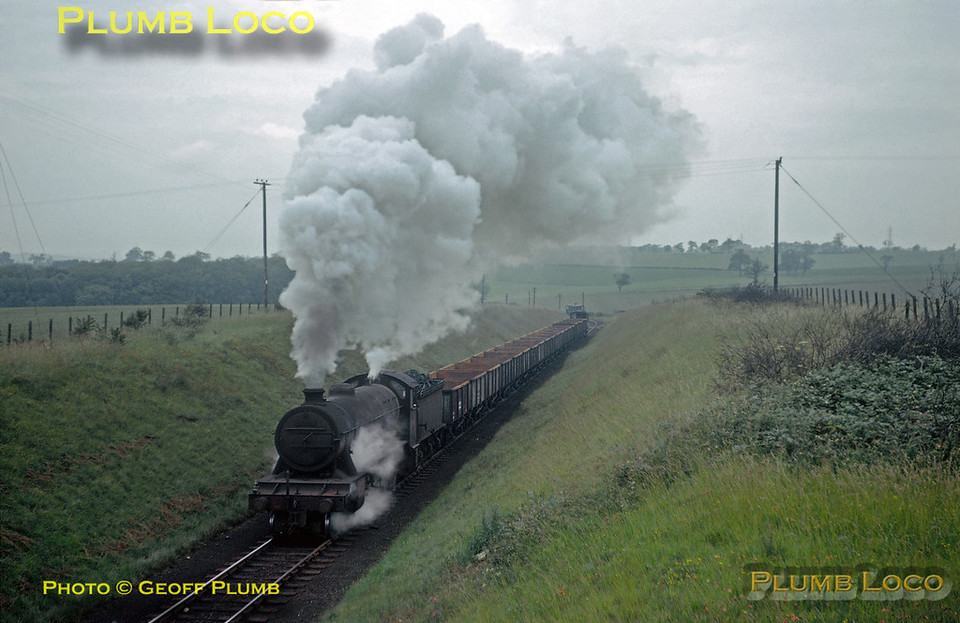 A train of empty wagons from Highdyke approaches bridge number 1 in July 1963.  Click on the image to visit the owner's website.

About ¾ mile south of Bridge number 1, Park Farm Lane joins the B6403 from the left.  There was a gated but unstaffed level crossing about 150 yards along the lane. Road users opened the gates when required, taking responsibility to ensure that it was safe to cross the line.  Locomotive drivers were required to give a warning whistle as they approached.

While here we may pause to remember a fatal accident at Park Farm Lane Crossing in late January 1941.  In very thick fog Blanche Arthur of Swayfield was helping her husband Horace, a baker, with his delivery round.  Blanche was opening the crossing gates ahead of the baker's van driven by Horace when a locomotive propelling a brake van suddenly appeared out of the fog, travelling from the left as we view it here, and knocked her down.  She may not have heard the train approach because of the muffling effect of the fog and the noise of the van's engine.

The next lane on the left, Canner's Lane, also had a gated level crossing about 150 yards along the lane from the B6403.

We are just over 1½ miles south of Highdyke at Burton Lane, the site of a level crossing where there was a gate keeper's cabin and sidings.

This is our first encounter, somewhat surprisingly, with the legacy of ironstone mining activity. The extensive industrial premises north of Burton Lane here are on a former 'brownfield site' which was first developed by the United Steel Company in 1958-60 as Easton Mines.  It was an attempt to exploit some deeper ironstone deposits by mining, rather than by openncast quarrying.  The venture proved to be uneconomic and Easton Mines closed in 1967.

In 1970 the site was taken over by Christian Salvesen who, by 1979, had established there what was then claimed to be 'the largest frozen food centre in Europe'.  In 1982 McCain's (the Canadian potato chip / french fry manufacturer) began manufacturing on the site which, inevitably, became known locally as 'the chip factory'.

Another farm lane leads in from the left with a former level crossing about 100 yards in.

Here, 350 yards of the old branch line's formation have been wiped off the map to allow the B6403 to cross above the dual carriageway A1.  But don't worry - once we pick up the line on the other side there'll be a proper footpath to help us on our way.

Now let's hop up onto that bridge and into our time machine...

From here onward Colsterworth & District Parish Council has laid out a Nature Trail along the old branch line.  We'll explore this in Part 2!

Back to Railways Rediscovered