Albert Kimpton was a commercial traveller who was on his way to Retford, where he would have stayed overnight at the White Hart Hotel in the town.  He was one of 14 people who died as a result of the accident.  Above is his name among the list of casualties published in the local newspaper The Grantham Journal on 22nd September 1906. (From The British Newspaper Archive, Image © THE BRITISH LIBRARY BOARD. ALL RIGHTS RESERVED.)

Albert Kimpton represented a London-based firm of wholesale drapery warehousemen, Devas, Routledge & Co. Ltd.  He spent the week travelling throughout the east of England promoting the company and coming home for the weekends.  There is a description of the activities of his employer here.

Below is an account of Albert Kimpton's funeral.  It's interesting to see that the Great Northern Railway was represented by the stationmaster at Cambridge, Mr. Essame who, just under six years later, would take over as stationmaster at Grantham.

Note that Albert Kimpton had previously been on a train involved in an accident, and he had purchased insurance cover for the risks associated with regular rail travel.  Britain's railways then did not have the reputation for safety that they enjoy today.

In April 2017 Jeremy Burrows wrote to tell us:

Albert Kimpton has a very attractive memorial in Great Shelford churchyard, with a carved angel standing 7 or 8 feet high with a bowed head.  I attended the school next door in the 1970s, and it was rumoured that if you looked into the angel's face its eyes flashed.  It was a common to dare somebody to go "over the wall" into the churchyard and look at the angel's face … but hardly anyone ever had the courage to do so.

Below is a photograph of the memorial. 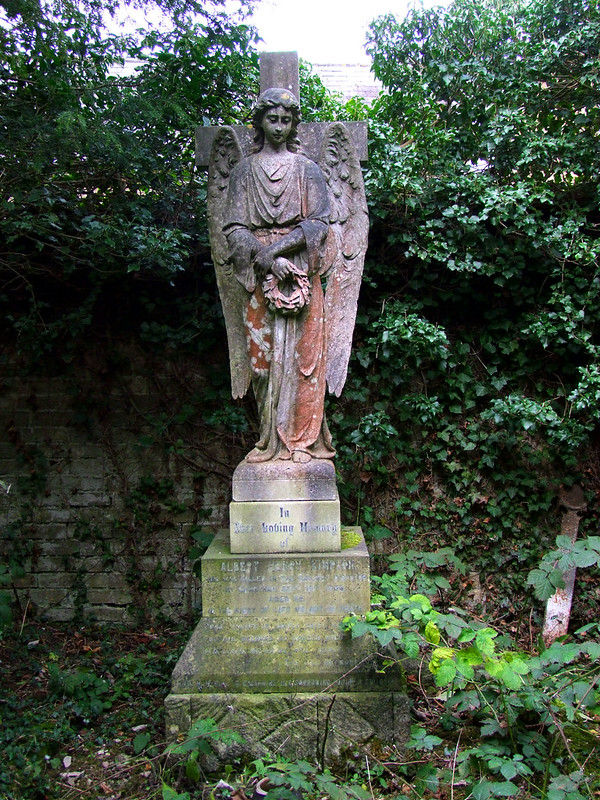 Back to The Grantham High Speed Accident of September 1906: the passenger casualties