On Monday 29th October 1973 No. 4472 Flying Scotsman stopped off at Grantham en route to a new base established by Flying Scotsman Enterprises at Market Overton in Rutland.  The locomotive was stabled overnight near the cattle dock on the Up side, south of the station.

The following day it moved on to Market Overton, via High Dyke, Stainby Sidings and Buckminster Sidings.  A Grantham crew was responsible for delivering the locomotive, with its short train, to the end of the British Rail tracks at Stainby Sidings: Driver Fred Burrows, Fireman Fred Harris and Guard Dennis Flear, accompanied by Assistant Area Manager Paul Needham.

No. 4472 was hauling two preserved vehicles:

A Bit of Background

In the early 1970s the British Steel Corporation (BSC) began the final rundown of ironstone mining in the area of South Lincolnshire, North East Leicestershire and Rutland.  An idea took hold to use the soon-to-be-redundant ironstone railways and their associated engineering workshops for a new venture.  The proposal envisaged:

In 1972 a site at Market Overton in Rutland was occupied by Flying Scotsman Enterprises.  The following year, in Lincolnshire, track between Stainby and Thistleton and workshop premises near Sewstern were acquired from the BSC by the landowner, Buckminster Trust Estate. The Market Overton and Sewstern workshops were linked by former ironstone railways and a remaining section of the Midland & Great Northern Joint line, which had closed as a through route in 1959.  At Stainby there was a connection to the main line via the BR branch from High Dyke.  During 1972 and 1973 much activity took place as a collection of locomotives and rolling stock was assembled.

For various reasons the project failed to gather momentum.  Following the end of ironstone traffic British Rail was keen to remove the junction at High Dyke, to allow the main line to be realigned for high speed operation.  Its closure, on and from 6th October 1974, signalled the collapse of the scheme.  Flying Scotsman had already departed in March 1974.

You can read more about the 1972-74 scheme in Eric Tonks' The Ironstone Quarries of the Midlands Part VIII South Lincolnshire, pages 61-67 headed The Preservation Experiment.

On Show at Grantham

There's a photograph of No. 4472 aproaching Skillington Road Junction here.

The map below shows the route of No. 4472 after leaving the main line at High Dyke, 5 miles south of Grantham, until it reached Market Overton. 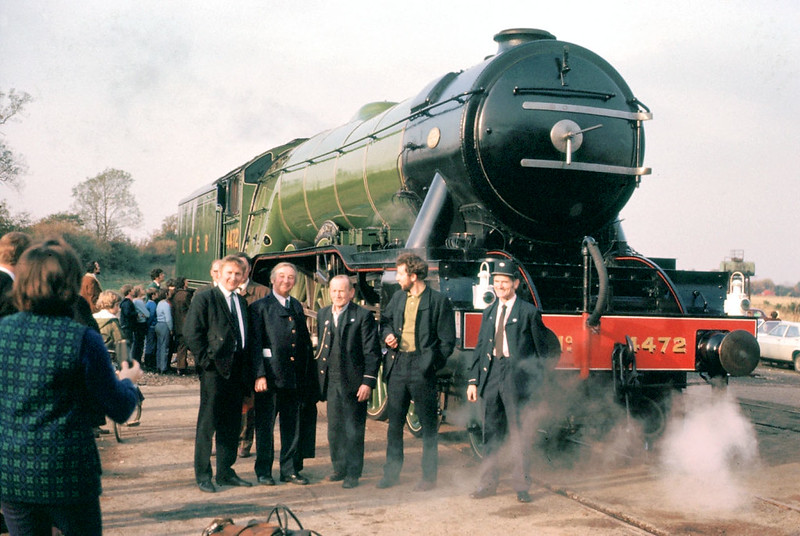 Here is a photograph of No.4472 just after arriving at Market Overton.  In front is the Grantham train crew who delivered it safely from the overnight stabling point in the former Up side goods yard as far as the end of the British Rail tracks at Stainby Sidings, from which point a Flying Scotsman Enterprises crew took over.

Copyright note:  the article above is published with the appropriate permissions.  For information about copyright of the content of Tracks through Grantham please read our Copyright page