Grantham Junction was the first location in the Grantham area where the co-ordinated control of fixed signals became essential for the safe working of trains.

Grantham Junction was created in 1852 when the new main line of the Great Northern Railway between Retford and Peterborough converged from the north, about ¾ mile north of the station, with the existing  line from Nottingham (the Ambergate, Nottingham, Boston & Eastern Junction Railway).  The two routes combined at Grantham Junction, and all trains on both routes continued through to the GNR's new Grantham station on the main line.  The link from Grantham Junction to the Nottingham line’s former terminus, at Ambergate Yard and the canal wharf, then became a short branch to a local depot for goods and mineral traffic.

By December 1864 the Great Northern Railway had installed ‘Second Class Signal Stations’ at both Grantham Junction and Grantham Station. The signal box at Grantham Junction was referred to as a ‘tower signal station’ in 1868, indicating an elevated position from which the signalman could command a clear view of approaching trains.

Signals and points were operated locally from these two early Signal Stations. There was no communication between adjacent signal boxes, and the signals and points had no interlocking system. Under GNR Instructions dated 1850 a train could go forward under a ‘caution’ signal five minutes after the previous train had departed or passed, and under a ‘clear’ signal 13 minutes after the previous train. This was known as a time interval system, and locomotive drivers had to keep a sharp look-out in case the previous train had stopped before reaching the next signal box, or had split, leaving vehicles behind.

The slotted-post signals then in use were of a type common on many railways in Britain at that time. They had three-position semaphore arms for daytime sighting and, for visibility at night, lamps capable of showing a red, a green or a white light. The arm horizontal to the left (or a red light) meant ‘danger’; the arm inclined downwards at 45º (green light) meant ‘caution’, and the arm out of sight, hidden vertically in the slot in the post, (white light) meant ‘clear’. At stations all three indications were possible; at junctions only ‘danger’ or ‘caution’ could be shown. 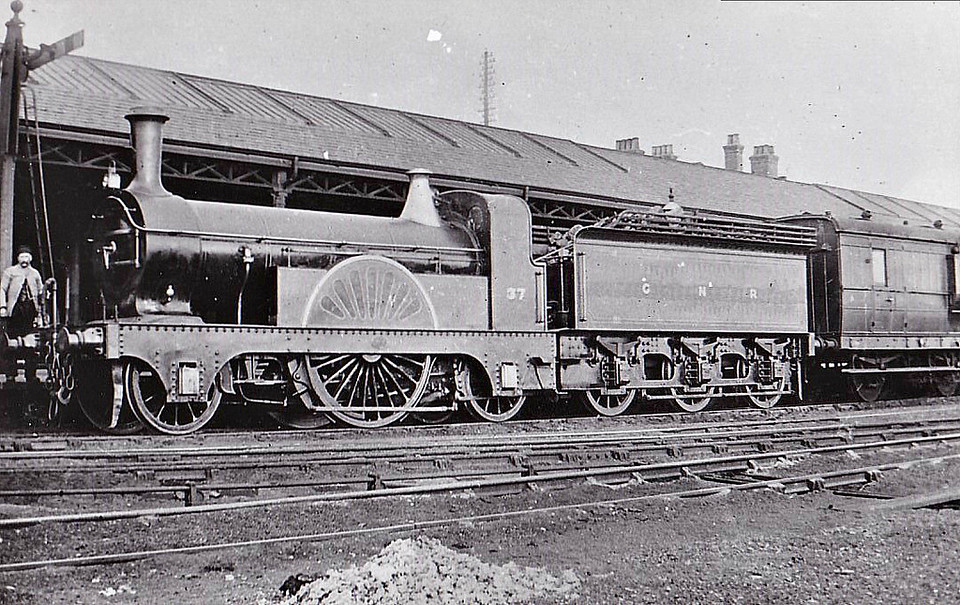 Above is a photograph of the Western Platform at Grantham where you can see a signal post which has a slot at the top for its original semaphore arm.  The signal has been updated by fitting a 'somersault' type arm supported by a cast iron bracket.

This period saw the introduction of new technology which laid the foundation for signalling practice at Grantham until the early 1970s. The principal advances were the interlocking lever frame, the electric block telegraph and the single-needle ‘speaking’ telegraph.

The first signal box at Grantham with interlocking was a new Grantham Junction box opened in 1868. It also soon became the first at Grantham to use electric block telegraph working. This was not for the main line but for trains on the Nottingham branch through Gonerby Tunnel.  Tunnels were prioritised for equipping with the block telegraph because the potential for rear-end collision when working under the time interval system was so great.  The block telegraph had already been installed, in 1866, at nearby Peascliffe Tunnel on the main line.

The GNR responded to pressure to improve safety by equipping its entire main line, from King’s Cross to north of Doncaster, with the electric block telegraph by early in 1872.

By this time the railway at Grantham station was becoming so extensive that in 1874 and 1875 it was necessary to open three new signal boxes. Grantham North was at the north end of the station and Grantham South was about half a mile south of the station.  In between, at the south end of the up platform, was Grantham Yard box. These three signal boxes operated Grantham station’s first interlocked signalling installation. At this time slotted post signals remained the standard type of semaphore.

In the late 1870s another new system to aid effective communication was commissioned by the GNR.  Local networks of single-needle electric ‘speaking’ telegraph instruments were arranged so that signalmen in every box on the main line and on the Nottingham line could communicate with each other and also with stations, using an adapted form of Morse code.

In 1877-78 GNR signals became two-position when the ‘caution’ indication was abolished.

The importance of Grantham as a rail centre continued to grow so that, only seven years after the resignalling of 1874, further major investment in signalling infrastructure was called for.  In 1881 the Nottingham lines were extended south from Grantham Junction parallel with the main lines, on a widened embankment and bridges, to a new junction immediately north of the station.  A new Grantham North signal box was built with twice as many levers as its predecessor. The old Grantham Junction box was replaced by a second new box, Barrowby Road, which controlled both the main line and the Nottingham line (though there was no longer a connection there between them) and also the branch down to Ambergate Yard.

This 1881 resignalling at Grantham North and Barrowby Road saw the large-scale introduction of the distinctive ‘somersault’ signals at Grantham.  In the late 1870s the GNR adopted this new design of semaphore signal with its centre-pivoted arm. Its development followed a multiple collision on the GNR main line on a winter’s night in 1876 at Abbots Ripton  The cause was snow interfering with the operation of slotted-post signals.

By 1881 signalling at Grantham was controlled from four signal boxes (Barrowby Road, Grantham North, Grantham Yard and Grantham South) which all remained in commission for well over 80 years, until the late 1960s / early 1970s.

All these signal boxes were sturdy Victorian structures with distinctive architectural character.  The brick base supported a heavy cast iron lever frame which incorporated a complex interlocking mechanism beneath the operating floor where the signalman worked.  The interlocking linked signal and point levers to prevent the setting of conflicting routes. The timber superstructure, with its decorative barge boards and tall wooden finials at each end of the roof, was a secure working environment for the signalmen, providing a good view of the surrounding tracks. Outside there was a narrow balcony to provide access for cleaning the windows, which slid open to allow verbal communication and signalling by flag or handlamp when necessary, such as in an emergency or if there was a fault with the main signalling equipment.

During this period Train Control Offices were developed to take full advantage of the opportunities offered by telegraph and telephone networks to manage, or regulate, traffic on the railway more strategically.  Train Control can be considered as a hierarchical step above the signal box. While the Signalman controls the movement of individual trains locally, the Controller maintains an overview of railway operations throughout an area, ensuring that trains run to the timetable, that staff are available to crew the trains, that rolling stock and motive power are in the right places, and so on.

By the 1920s the application of electrical technology to signalling allowed a signalman to observe and control the movement of trains beyond the area in view from the windows of his box. Electric track circuiting showed the progress of a train by the illumination of lights successively on a diagram. Power operation of signals and points provided the potential for control well beyond the reach of mechanical systems which relied on wires, rods and pulleys.

The introduction of electric track circuiting in the 1920s at Grantham paved the way for the introduction of automatic colour light signalling on open stretches of line in the 1930s. This was vital for the reliable operation of the prestigious new Silver Jubilee, Coronation and West Riding Limited streamlined high speed passenger services. Grantham North and Grantham South boxes were the most affected, both having relay rooms constructed nearby. Signalmen at these boxes then assumed control of, or monitored, several miles of the main lines to the north and south of the station, allowing the closure of some outlying smaller boxes. This was the last major upgrade before traditional signalling was swept away in the early 1970s.

The GNR somersault signals on the main lines at Grantham that were not superseded by colour light signals during the 1930s were replaced by the 1950s with LNER standard upper-quadrant signal arms.

Modernisation continued after the war, perhaps most noticeably with the replacement of the Yard Box up starting signal, Grantham’s last tall semaphore junction signal with co-acting arms, by a colour light signal accompanied by a banner repeater near the north end of the platform.

The contraction of the railways and the introduction of remotely controlled power signalling led to the closure of all four Victorian signal boxes at Grantham over a period of less than four years, between 1968 and 1972.

Barrowby Road closed in August 1968 and Grantham Yard in June 1971. However, the Yard Box cabin was retained and given a new lease of life. It was equipped with an electronic switch control panel capable of operating new colour light signals, power operated points and full track circuiting throughout the Grantham area and for several miles of the main line in both directions. The old Yard Box was reopened as Grantham panel signal box in February 1972 when Grantham North and Grantham South boxes closed, bringing to an end the use of mechanical semaphore and disc signals in the Grantham area.

Grantham panel signal box was in use for eight years until, early in February 1980, the area controlled by the new Doncaster Power Signal Box (PSB) was extended to include Grantham. Alongside the new signalling scheme came track improvements and rationalisation to prepare the East Coast Main Line for a new generation of trains running at speeds up to 125mph.

Signalling at Grantham continues to be controlled from Doncaster PSB, with a local panel available for use in emergency.

Acknowledgements
This overview and the signal box histories (some currently in preparation) rely heavily on the following comprehensive studies, which are recommended without reservation:

We are very grateful for the advice and support of John Pegg, who worked as a Telegraph Lad and Signalman in the Grantham area between 1957 and 2004, and Mick Grummitt, Rest Day Relief Telegraph Lad from 1959 to 1962 at Grantham North and Grantham South boxes, and at Crescent Junction, Spital Junction and Westwood Junction boxes at Peterborough.

Forward to Signalling at Grantham - staff, shifts and training

Back to Signalling and Signal Boxes